I distinctly remember getting off the plain from America to China wearing wrinkled sweatpants and a t-shirt thinking, “What a first impression I am making on this place”.  However, my unkempt appearance didn’t stop a little Chinese girl from asking to take a picture with me because of the red hair and pale skin that she had never seen before.  I quickly realized how much I had to learn about Chinese culture. 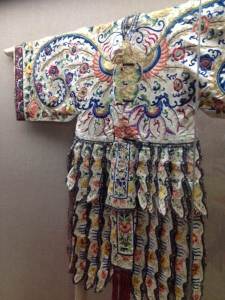 Traditional Chinese dress was usually an oversized tunic made out of vibrantly woven cotton or animal skin.  The vibrant colors used in those garments inspired the intricately embroidered Opera costumes that remain the same even today.  While the Chinese economy has struggled to remain afloat in earlier decades, there was always money in their treasured Opera.  The costumes featured in these operas are world renowned for their distinct cut, detailed head dresses, and flamboyant makeup.

Today there is a huge Western influence on Chinese clothing.  If you stop by a news stand and flip open a magazine, you will find mostly Western celebrities.  I met a boy who could hardly say a sentence in English, but he could sing Lady Gaga’s “Bad Romance” at the top of his lungs, word-for-word.  Of course there are Chinese celebrities that are admired, but the government has such a strict hold on censorship and funds that all of their media is very low budget; therefore, they look to the West for fashion icons.  Another factor that affects the Chinese street wear is transportation.  The most popular means of transportation is the bike or the subway, so the majority of people have to wear very functional clothing.  In big cities, Chinese women will only been seen in heels and a modest dress, and the men will be wearing slacks and a nice shirt.

These women are tough: they can ride a bike, climb up to the Great Wall, and run to catch a bus, while sporting five inch heels.  They are also unbelievably on trend to fashion in the states.  The two unfortunate fads of China are knock-offs and graphic shirts.  The knock-off industry is outrageous in China, to the point where there are six-story buildings dedicated to everything from OPI nail polish and Ray Bans, to Beats headphones an 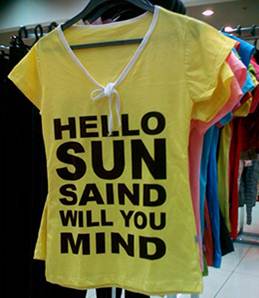 d Louboutins.  These knock-offs are smuggled around the world for their cheap imitation of quality goods.  The graphic tee fad includes bright colors and adorably incorrect English phrases.  I’m sure they think the same thing when they see Americans sporting a back tatt that says something incorrect in Chinese, so we’re even.

Recently Chinese influence has been found in the obvious Qi Pao, a dress that is form fitting, has a mandarin collar, and uses the traditional red or black patterned silk.  These have taken a modern look by current designers, especially in the 90’s.  Other than that, we have seen great sewing techniques come from China, like the Hong Kong technique of sewing a hem.