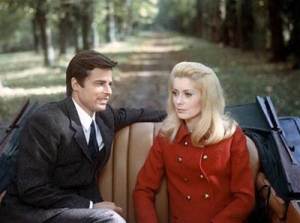 I know that there are many nights that we college girls just sit around twirling our thumbs and think what should I do tonight. Yea right! However, if you ever find your self-saying that you should watch Belle de Jour. Yes, it is a French film there are subtitles and yes, it is about a prostitute. I will get back to that part. I mean you should watch it just for the pure love of fashion and classy style. 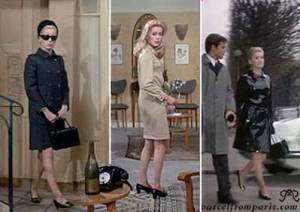 Your probably still think about the prostitute part right. Well this movie centers around a young woman Séverine and her double live. So she is married to this doctor Pierre he is tall, dark hair, he is super sweet, and his eyes! Anyways, she can’t have marital fun with her husband, so she hears about this “upscale” brothel and goes to check it out. Well she is intrigued and starts working for Madame Anaïs, her customers are well lets just say they are no panty droppers. Then she commits to a regular work schedule of two to five every day, so she is given the name Belle de Jour that means beautiful day. She encounters a new customer, Marcel the thug, he drops by and pick to be with Belle de Jour. Let me paint you a picture of him, all gold teeth and he looks like he hasn’t showered or anything in about a week if you could smell a movie he would reek. Well he become entranced by her and falls for her, she falls for him too. Well he “loves” her so much he tried to kill Pierre not being a good shot he leaves Pierre as a veggie. Don’t worry Marcel gets shot too! At the end Pierre finds out from a friend about his wives unfaithfulness and is heart broken. I was really mad at her at this point. Then the movie ends, yup that’s it. 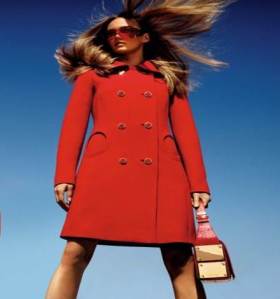 If you are not interested by now then let me tell you about her style. Have you heard of Yves Saint Laurent? Well you can thank Séverine and her handbag for helping launch YSL. I am! While she was not working she had the best clothes. Her wool coats and perfectly tailored dresses give her the perfect minimalist classic look. 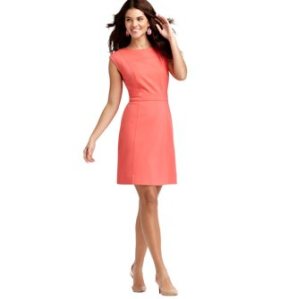 In the opening scene she is wearing a double-breasted red coat and Michael Kors just made a similar red coast for his Spring 2013 line. She is seen a lot in her A-line neutral colored dresses, which has been replicated for years. LOFT recently made a dress similar; with the simple lines it is a dress that is a wardrobe staple. Many women have copied her style and sophistication since this movie was made in the late 60’s. I mean who wouldn’t want to always look polished and perfect all the time. So we might not take professional career advice from Severine but we can take some her fashion, since that is the only thing she is doing right.