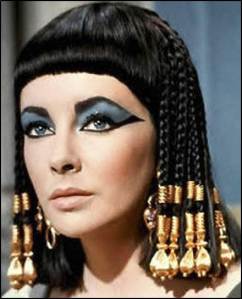 Stunning violet eyes, sexy curves, red lips, luscious eyebrows and a renowned diamond collection, what woman doesn’t wish they could live a day in the life of Elizabeth Taylor?  Few people on earth can attest to a film career, or any career for that matter, that spanned over six successful decades and were still revered and praised at the end of it all. Born in London, England to parents that were well off in society, the Taylor family moved to Los Angeles while Elizabeth was still young. It wasn’t too long after, that both MGM and Universal studios were fighting over rights to contract the natural beauty. Universal ended up the victor and contracted her for seven years. She was a star by the time she was 12-made famous by her role in National Velvet, a role that embedded a magical and mysterious infatuated bond between young girls and horses. By seventeen she was dating a millionaire and by 18 she was married for the first time and divorced nine months later. She was married seven times and was very open with her love affairs, making her personal life as dramatic as her roles on stage.

Elizabeth claimed several roles that plunged her into iconic fame. Most recognized for her stunning natural beauty, she actually had a mutation called Distichiasis that gave her two rows of eyelashes. Her role in Butterfield 8 she hated, claiming it was the most pornographic script she’d ever read: but even so, the mink coat she wore in the movie made quite the statement – and has been a statement ever since. In the 1950’s, women everywhere appeared in dresses that resembled a white slip – a trend accidentally invented by Taylor in the film, Cat on a Hot Tin Roof. Elizabeth’s role in Cleopatra had the most profound statement of all for woman everywhere. Basically, if you wear cat eye liner, you can thank Elizabeth for making that happen. For the movie, she applied the eyeliner herself because her make-up artist threw out his back before filming began and so she studied his technique and copied everything she had seen him do.

Elizabeth’s close friend Michael Jackson wrote a song called “Elizabeth, I Love You” proving that Elizabeth inspired more than just cat eyes and mink coats, but lyrics as well. Along with lyrical adoration by MJ, designer and Taylor enthusiast, MK (as in Michael Kors) designed his 2006 Spring line of fashion forward western wear after Elizabeth’s style, made famous in th

How could you incorporate signature Taylor taste into relevant personal style? Mink coats, plunging necklines, red lipstick, cleavage, cat like eyeliner and 64 carat diamonds are a good place to start. “Taylor lived the kind of grandiose, larger-than-life existence that we are not likely to see again in our lifetime. Her influence will be with us for a long, long time.”