When a daughter stares deep into her father’s eyes, she hopes that he sees her not only

as his little girl but also as a young woman. However, that twinkle she so desperately searched for within her father’s gaze is missing and she wonders if she has not earned his approval. Her boyfriend is coming over for dinner and she’s anxious to confirm if her suspicions are correct. Does her father hate her boyfriend? He seems nice enough; however, there was that one time he pulled up to her house on a Suzuki Boulevard S40 motorcycle. He threw his cigarette butt in her mother’s azaleas and jokingly slapped her father’s butt as they talked about football. Her previous boyfriend was a music nerd and mainly dressed in cardigans, cargo shorts, 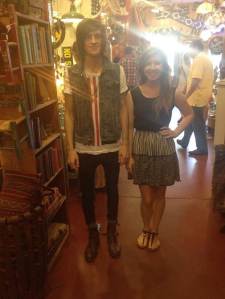 colorful socks, penny loafers and large, black rimmed glasses with the lenses popped out. But this new guy was different; he was dangerous. He was too cool to comb his hair and he didn’t care if his clothes were designer or from the .99 cent bin on the corner of Austin and 25th. He might have a few warrants, maybe a traffic ticket or two…or twelve but his smile was like birthday cake and she melted every time he walked by. She was over the moody, indie band hipster and she was in love with a man whose talent was avoiding the police. How could her father not like him? He wasn’t a bad boy…just misunderstood.