, Channing Tatum, and Justin Timberlake, Hollywood had a heartthrob by the name of Cary Grant. And he was, for lack of a better word, a total babe. His attractiveness was like a fine wine it only got better with time. Cary Grant processed the kind of attractiveness that the members of One Direction do not and will not ever hold a candle to. I mean this man was a superhuman stone cold fox. This foxiness was exemplified in Alfred Hitchcock’s, North By Northwest. 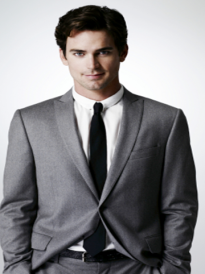 This suit is worn by Grant wore almost the entire film because it’s the greatest suit in cinematic history. Like, Kanye West is gonna let you finish, but he wants everyone to know that this suit is the greatest of all time, of all time. This blue/gray suit made from lightweight wool was a, “single breasted suit, ventless, with three button fastening and notched lapels. Trousers with forward pleats. ‘Oxblood’ leather derby shoes worn with grey thin ribbed socks. White medium spread collar shirt with double cuff; light blue initialed cufflinks, [and] grey silk tie.” The suit was tailored so impeccably that could possibly be a second skin of Grant’s. The credit for it has been confusingly given to Kilgour, French & Stanbury, of Savile Row, and Quintino, of Bev

erly Hills. According to the biographer, Richard Torregrossa, Hitchcock, “made everybody

in the picture dress in a classic style… He didn’t want the picture to date because of the clothes.” This suit is accomplishes this goal ten fold, and we can see that Christian Grey definitely took note based on his staple gray suit, as did Tom Cruise in Collateral, Ben Affleck in Paycheck, and Daniel Craig in 007. Eve 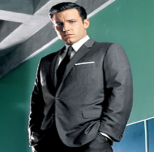 n Matt Bomber who’s notorious for looking dapper 100% of the time pays reattribute to Grant in White Collar. This suit is copied by stylists for films and television for its timelessness even 55 years after its making. The most impressive aspect of this costuming is that Grant chose his wardrobe himself; talk about the total package a man with talent and taste.

Next time you’re in a movie and you see a man wearing a suit you swear was sewn by the hands of angels, give thanks to Cary Grant for making the grey suit an iconic staple in a man’s wardrobe.