In today’s world of fashion, part of your identity is the attitude you portray. When you think of attitudes, you think of: sassy, shy or kind, right? Taking it one step further, think of attitudes society has about the world we live in.  Attitudes are just your feelings about things whether they are positive, negative or even apathetic. Have you ever thought of how societies’ attitudes about different things can affect the world of fashion?

As seen in the past couple years, the general opinion of marijuana for recreational use has become more accepted by society. For example, have you ever visited Colorado, been skiing and a worker on the slopes ask you if you want weed? That will catch you off guard if you’re not used to it! But to people who live in Colorado, this is labeled as normal. Famous people like George Zimmer, founder of Men’s Wear House, have come out to support marijuana being legalized in other states too and because thoughts become words, then words become actions, it could happen.

On the opposite side of the spectrum, we have negative attitudes expressed towards the rise in police brutality in past years. It’s not a discussion hard to miss considering it is on every social media or news sites labeled with something about police brutality or the “Black lives matter” movement. The people that are responsible for protecting our citizens are instead seen now by some citizens as using “excessive force”, brutally injuring, or even killing them. Whether you agree with the “Black lives matter” movement or not, I think we can all agree on the dominating attitude of fear and concern regarding these events.

Now even though the legalization of marijuana and the rise of police brutality are controversial, I believe that many women have a supportive attitude towards more women being present in the work place. There is an increasingly positive attitude not only about women being present in the work place but also being CEOs and founders of companies. If that’s not empowering to women, I don’t know what is! People like Tory Burch, Kendra Scott, and Yahoo CEO, Marissa Mayer are proving to the world that women are as strong and smart as the men. 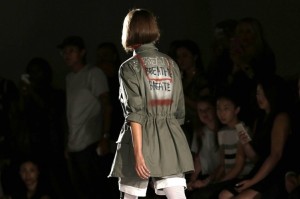 Through all these diverse set of attitudes you can see all of them affecting fashion! The 70’s look is reappearing at the same time as marijuana legalization with band shirts, neutral colors and floral everything. Not to mention the marijuana leaf itself on just about every type of clothing you can think of, from women’s leggings and skirts to men’s t-shirts and hats. Even police brutality has its own version of fashion that the “black lives matter” movement have created with shirts and gear supporting it.  Those strong-willed women are changing fashion as they show men how it’s done, improving the professional wardrobe by still being fashion forward and feminine!

1 thought on “What’s with the Attitude?”