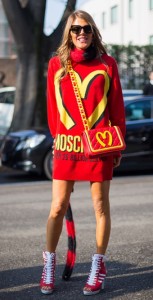 In the spotlight, there are three types of celebrity trendsetters who influence the fashions we all wear: innovators, leaders, and followers.  A fashion innovator is known for beginning a trend and having the confidence to do their own thing.  Innovators do not look to others for fashion guidance, but they wear their own styles, even when it is not popular.  A fashion leader adopts a new trend early on, but did not start the trend themselves.  The leader has a lot of knowledge about fashion, especially what the next big thing is, and has a large group of followers.  Lastly, a fashion follower is jumbled in with the mainstream crowd.  They are in the majority to take on a trend once it has been seen many times before. They look current, but not cutting-edge.

What makes someone a fashion innovator is having the personality to be outgoing and as far from mainstream as you can be.  Anna Dello Russo is the epitome of a fashion innovator.  The bold choices she expresses through her outfits, such as a fast food dress, make her an inspiration.  Anna is several steps ahead of anyone and has the confidence to not care about other opinions.  Her ability of being able to create trendiness through adventurous items is what makes her a true fashion innovator.

What makes a fashion leader is keeping up with the trends and putting their own stamp on the fashion they wear.  Taylor Swift is always on top of the newest styles, but they are not anything she created herself.  Her classic two-piece sets created a rampage among both her fans and fashion gurus alike.  She made an existing style that is so simple become interesting by putting her own spin on it.  Taylor’s abundant group of followers help her fashion choices skyrocket among the masses, which qualify her as the perfect fashion leader. 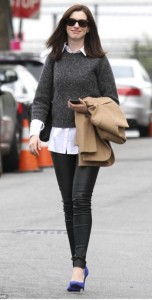 What makes a fashion follower is someone who conforms to a preexisting trend that the majority of the population is already wearing.  Anne Hathaway’s style is very traditional and mainstream.  She does not pop out any clothing with an intriguing factor or something the public has yet to see.  Anne sticks to simplistic and casual, therefore she is not one to be seen taking any fashion risks.  Her modest and understated look makes her a typical consumer who blends in with the majority.  Anne’s clothing remains to stay under-the-radar, which categories her as a fashion follower.

Each of these women can give consumers guidance on how to be in a certain group by what they choose to wear.  Women love to express themselves through clothing, so they dive into these extravagant outfits to be an innovator, or keep up with the trends like the majority and be a follower of fashion.  We can take cues from these women and use fashion in a way to express ourselves.  Find out who you are and own your style, you can never go wrong with your own choice of fashion.