When it rains, it pours…love?
In August, Hurricane Harvey dumped 27 trillion gallons of water over Houston, causing many people to be in need of temporary shelter. When he finally departed, many were left without homes. Because of this substantial need to rebuild, people will have to purchase current furniture instead of the antiques they may have once treasured. Modern materials and styles will be prevalent into the future, as well as stronger foundations and higher elevations in housing. In the fashion world, Harvey plays a major role as well. Companies have already sold large quantities of t-shirts supporting Texas and relief efforts in Harvey’s aftermath. I have no doubt that we will continue to see Harvey’s tone shift from devastation to community love and support well into the future.

Total Eclipse of the Heart
A total solar eclipse enveloped the globe in mid-August, causing complete totality and darkness over sections of the United States. Portions of it could be seen all over the world, however, and we can anticipate the eclipse’s influence well into days to come. Knowing there’s a metallic trend already on its way this fall, we can expect the eclipse to play a role in the expansion of metallics and space-inspired looks with ease. On that day, many had their eyes on the sky, appreciating the beauty of Mother Earth and now the eclipse glasses are off, we look forward to a renewed interest in the “green movement” and resurgence in the popularity of eco-friendly products.

March on, Ma’am
Women have been in constant battle for equality throughout history. More recently, with this year’s presidential election outcome, many women weren’t happy with some of the things our now president has said in his past, and took a stand. Literally. Approximately 500,000 women gathered outside the nation’s capital building and many more in several other cities across the country that same day. Since that day, pinks and reds are now symbols of women’s empowerment. We can anticipate a surge of graphic tees with slogans such as “girl power,” “women’s rights are human rights,” and “feminist” emblazoned across them. Graphic tees are an easy way to project what you believe in, without even saying a word. 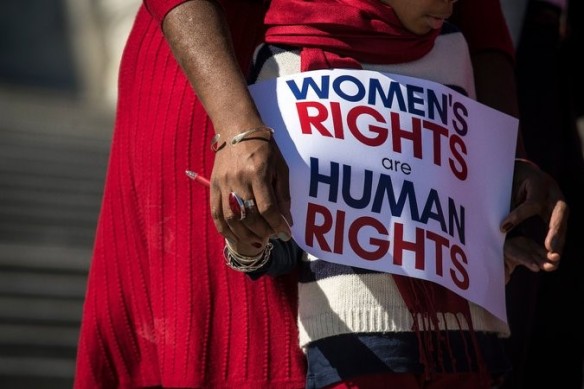 No matter what cause you choose to support, there’s always a way to show your love. Want to support Hurricane Harvey relief efforts? Buy from a small business that will send profits to Houston! Want to express your love for Mother Earth and the deep space she’s in? Use eco-friendly metallic eye shadows when going out with the girls! Want to claim solidarity with our 21st-century suffragettes? Do it while wearing reds, pinks, and graphic tees!

Support is always in style, sister! Fashion is communication, and you can show the world your values without ever saying a word.

2 thoughts on “Rain, Shine, or Shadow, it’s a Woman’s World”