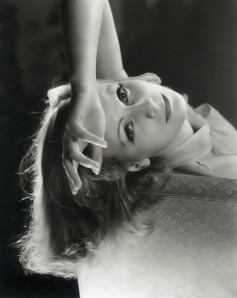 Never called Greta, forever Garbo. Endlessly imitated but never matched. She was a great actress, but had something more. It wasn’t her form. She was tall and awkward. Her large feet were a Hollywood joke. Was it her air of mystery? Her rejection of celebrity? Her revolutionary sense of style? Let’s start at the beginning.

Born in Sweden in 1905, Garbo signed with MGM studios at 20 years old, uprooting to Hollywood, and soon becoming the premier star of American silent film. When the silents were shunted out by the talkie, Garbo found hereself in the same predicament as Jean Dujardin’s character from The Artist. Nevertheless, audiences adored her accented voice and her success continued until she fled Hollywood in 1940.

“I want to be left alone.”. This line from Garbo’s film, Grand Hotel, became the mantra for her life. She wanted privacy, believing that her life was her own business. She rarely appeared in public and never gave interviews. This exasperated the media and her fans, her mystique only increasing obsession. In these days of Internet and reality TV, the reclusive Garbo sounds extremely refreshing.

A large part of Garbo’s appeal was her androgyny. At odds with her feminine face, Garbo had a lanky form, manish gait, and deep voice, accompanied by a particularly masculine style in a time when ladylike gowns and skirts were vogue While she appeared on the silver screen in glittering gowns, her signature off-screen look was slacks, men’s-style shirts, tailored jackets, and flats. I am coining the word mandrogynous to describe her mostly masculine style. A fashion designer once told her to dress for herself and never mind what others thought, advice that Garbo took to heart. 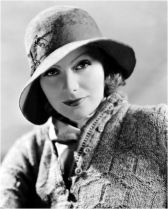 She was the pioneer in America for women’s pants. Marlene Dietrich and Katherine Hepburn? Both imitators of Garbo. A true trendsetter, her favorite chapeau, a slouchy fedora, was named the Garbo hat. Don’t forget the shoes. She preferred flats in a time when women only wore heels. She befriended Salvatore Ferragamo, who custom-made her over 70 pairs of shoes. I suspect having a movie-star salary was handy at such times. The trench coat was another men’s-wear style she popularized. She was the modern innovator for the androgynous style, setting trends that surfaced a decade later in the 1940s.

Through Garbo’s disregard for others’ opinions, she changed the course of fashion. We ladies might still be wearing skirts and pumps everyday if not for her. She partially inspired Yves Saint Laurent’s iconic le smoking from 1966. Compared to Garbo, Diane Keaton had a similar style circa 1985 (think Annie Hall). From full-out menswear ensembles from designers like Stella McCartney to individual pieces like men’s shirts or oxfords, Garbo’s androgynous, tailored-chic influence is everywhere. If Garbo were giving us fashion advice, she wouldn’t say dress just like her. She would tell you to not bother with trends, to wear what makes you comfortable and confident. Mandrogynous or feminine, Garbo would approve as long as you make it your own.

Find our more about the Great Garbo as well as the androgyny she inspired here:

Alexander, H. (2010, March 2). Greta Garbo exhibition opens in collaboration with Ferragamo: inside the wardrobe of Hollywood’s most inscrutable star. Telegraph. Retrieved from http://fashion.telegraph.co.uk/columns/hilary-alexander/TMG7352191/Greta-Garbo-exhibition-opens-in-collaboration-with-Ferragamo.html

Long before sultry, entertaining, feather-wearing Las Vegas showgirls, there was Josephine Baker. Long before we were shocked by the outfit choices of Cher, Lady Gaga, Katy Perry, and Nicki Minaj, there was Josephine Baker. And long before Angelina Jolie adopted every other child she met, there was Josephine Baker, who adopted twelve children of various races and called them her “rainbow tribe”. Josephine, born Freda Josephine McDonald, was born in St. Louis, Missouri – shout out to my hometown – in 1906. At 15, she began dancing for the St. Louis Chorus Vaudeville Show, but in those times Josephine was considered a second-class citizen due to her skin color. So, she packed up and moved to “The City of Light”, aka Paris, in 1925 and rose to fame. She was a triple threat – singing, dancing, and acting – for over four decades as the ultimate entertainer of her time. She even became the most photographed woman and was a muse for several including Pablo Picasso and Christian Dior. The color of her skin didn’t matter anymore; Josephine was a star.

Her sultry dance moves and outrageous costume choices have made her one of the most memorable and fashionable entertainers of all time. Her style was elegant and her success afforded her the opportunity to indulge in luxury goods such as her pet cheetah that often accompanied her on walks through the streets of Paris with a diamond-encrusted collar. Talk about a fancy feline! This was the age of Art Deco in Paris, and Josephine epitomized this look with sleek lines and geometric shapes. But perhaps her most memorable fashion moment was from her “Banana Dance” where she performed in almost nothing but a skirt made of bananas, yes, as in the fruit. Who on earth could make dancing in a banana skirt look sexy? None other than Josephine Baker. I mean it though… Beyonce tried back in 2006, and even though I love that Halo singing diva, the whole thing was a total flop.

Luckily, Josephine’s style has impacted us in several positive ways as well. Miuccia Prada paid homage to Josephine in her Spring/Summer 2011 collection with banana prints and finger waved hair. The geometric patterns and accessories obsession during the Art Deco movement and Josephine’s reign on fashion can be seen all around us today. Modern-day fashionistas can emulate Miss Baker by overindulging in accessories and making daring, fearless choices. So load on those pearls, gigantic earrings, and cocktails rings and never look back. If you’re a little more hesitant, try a beaded headband or a neat print. Women of all ages, shapes, and backgrounds can take a cue from Josephine’s style and her confident attitude. Here’s the key: be yourself and don’t be afraid to make a statement. Her impact on our world and our industry is indisputable and many famous entertainers can thank her for teaching them the meaning of “pushing the envelope”. Just remember, before Lady Gaga wore a meat dress, Josephine Baker wore bananas.

Wermick, A. (2012, May 27). A History of Style: Fashion Inspired by Josephine
Baker. Retrieved from http://www.collegefashion.net/inspiration/a-history-
of-style-fashion-inspired-by-josephine-baker/