These days the term ‘Style Icon’ gets thrown around like candy at a parade, but there is no truer example of the term than Deborah Harry, the lead singer from the 1970s and 80s-era hit punk and new wave band, Blondie.

Without Harry, the New York punk scene would have looked completely different, and it may have taken years longer for punk to be accepted into the public dance world. Without Blondie’s song, Rapture, rap wouldn’t have reached the public eye near as quickly, as it was the first rap-infused song to top the charts and be featured on MTV.

Blondie was far ahead of the game as they helped pioneer the new wave music sound and brought gay rights into the music spotlight by playing at some of NYC’s first-ever Gay Pride events. Harry was among the first female musical stars to commission clothing, mostly from her neighbor, the legendary Stephen Sprouse, who went on to be known as the punk glamour god of design largely in part to his ties with Harry.

Not only in music, but also in fashion, Harry has been a leader in the trend world since humming her first tune, and she hasn’t stopped since. She was the voice, the face and the clothing model of the late 70s.

Her tramp-beauty cloaked in a Monroe aura created timeless tunes that continue to get remade, covered and reused.

The iconic punk diva created a look that’s been reimagined, re-done, watered down and re-sold time and time again because everyone wants to look like the mother of American punk. With her bed-hair, sharp cheekbones and cupid bow lips, she put the blonde in Blondie.

Though the 70s ended long ago, Harry’s influence has never waivered. Age can’t stop this woman, at 69 she is still dropping records, reinventing songs, singing shows and being featured in fashion publications, TV shows, movie 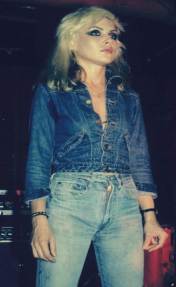 s and media outlets across the globe. She not only was a legend but also continues to live as one, breaking new bounds and conquering new ideas, continuing to inspire change and trends.

As the styles from the 70s return, and hints of 90s grunge creep back onto our trend radar, we are clamoring for Harry’s style once more. The two toned hair, the denim-on

-denim, the monochromatic outfits and neutrals from head-to-toe, all are Harry signature styles that are back with a vengeance. She will be sure to be lead the pack with her iconic quirky style of downtown Barbie with a vixen twist as she rocks short blonde hair and fabrics and combinations that pop.

In this age of fashion as a means of personal expression and clothes as a form of communication about ourselves and our beliefs, who better to lead us than someone who has been expressing herself and touching lives for decades? In choosing whom our icons are, our muses for how we dress and what we wear, would you rather have Harry Styles or a Harry with true style?

The Rock and Roll Hall of Fame Museum. (n.d.). Retrieved March 30, 2015, from https://rockhall.com/inductees/blondie/bio/

It is definitely 2015, we’re all sure of that, but get ready to take a second look when you walk into clothing stores and see the revival of ‘70s fashion everywhere you go. No, you didn’t walk into your mom’s teenage closet, you have just discovered the modern ‘70s trend that is going to be seen throughout this year. We’re used to clothing today that is

influenced by fashion of the past, but this ‘70s restoration is unlike that. Outfits from head-to-toe are going to reflect this simpler decade due to people’s nostalgia for a less-chaotic time and the pre-digital era. So dust off those lava lamps and don’t be afraid to take a direct page out of Donna or Jackie’s style guide from That ‘70s Show.

It’s time to stand tall in a pair of mega-platforms after repeated seasons of single-soled shoes. The clunky and chunky heels

are reminiscent of ‘70s glam and disco dancing like in the movie Saturday Night Fever. Platforms were thrown to the side when pumps were seen as more classic shoes, but these once go-to pair of heels is making its big return and towering over all other styles. Shoes are going to be taken to new heights and though heels are the most popular you’ll see platform sandals, flats and boots to follow.

Denim comes and goes ever so often every couple of years, and this year would appear to be one where it is back. When I say denim, I don’t mean only jeans. The fabric that’s a favorite of many is going to be incorporated into a numb 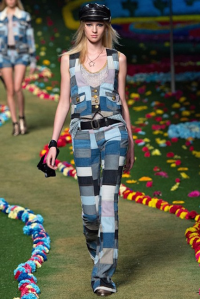 er of garments like jackets, dresses, skirts, tops and even handbags in different washes and embellishments. Denim is going to be a statement piece, I know…who would’ve thought? Including wide-legged flares that have been out of sight for many seasons now and at once thought to be never seen again. We’re now in the middle of a true denim moment.

When you think of white and lace what comes to mind? Wedding dresses I assume? 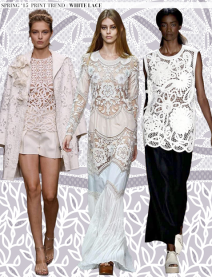 Well throw that kind of thinking out of the window because the only thing you have to say yes to this season is white lace on everything from skirts to shoes. This trend is both feminine and romantic with beautiful thread-work that was presented in many spring collections. Anyone can incorporate this into their wardrobe, and you’re likely to catch it on flowing maxi dresses and skirts, a popular silhouette in the 1970s.

As we make our way into the future, everything old becomes new again just like ‘70s fashion has in 2015. This comeback cannot be ignored because it has already spread across runways and now two ready-to-wear seasons. The clean and contemporary aesthetic of the ‘70s takes on the minimalistic look people have been evoking in their wardrobe lately and is a breath of fresh air we can all look forward to.